Jim Minick will return to the region for Hollins University’s Lex Allen Literary Festival on April 7, reading from his most recent work, Fire is Your Water. 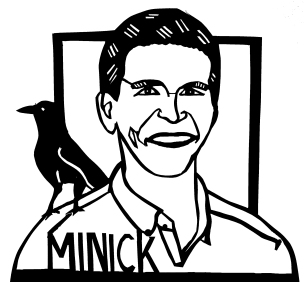 Minick is an assistant professor at Augusta University and core faculty in Converse College’s low-residency MFA program. He formerly taught at Radford University and will also appear at the Radford Public Library on May 15th.

In its 58th year, the daylong Lex Allen Literary Festival includes three visiting authors as well as a presentation of standout poems from the annual undergraduate poetry competition. Jim Minick will read at 10:30 AM, but come for the whole day to catch readings by poet Cynthia Manick at 3:15 PM and Janise Ray, the 2018 Louis D. Rubin, Jr. Writer-in-Residence, at 4 PM.

Minick, the author of four previous books, released his first novel in 2017. A 2010 memoir, The Blueberry Years, won the Best Nonfiction Book of the Year from the Southern Independent Booksellers Association (SIBA). He talked with BOOK CITY ★ ROANOKE about Fire is Your Water (Swallow Press, 2017). The novel, a 2018 finalist for Berea Colleges’ Weatherford Award for Appalachian fiction,  includes both lyricism and straightforward action in the story of the young faith healer in doubt, Ada Franklin; Will Burke, a nonbeliever; and his companion, the raven Cicero.

BOOK CITY ★ ROANOKE: Place plays an important role in your work. In the Pennsylvania Valley of Fire is Your Water, we’re secluded, but the larger world advances in the form of tourists and draft letters. What first prompted the very particular setting, rural Pennsylvania in the early 1950s?

Jim Minick: This setting and story are based on where I grew up in south central Pennsylvania—country very similar in geography to Roanoke/SWVA. Much of the whole is also based on family story—a barn did burn in the 1950s, my great-grandmother was a healer and she was one of two women who entered that barn to save animals, and she also worked on the PA turnpike. There’s more, but that gives you a taste.

BCR: Wow, that’s rich history to mine. And talk about in media res! You begin the novel with that dramatic barn scene. Did you know from the start that this was where your story would begin?

JM: Close to this—the earlier drafts had the whole starting with the fire’s start in the hayloft—and then spreading—so the final version just is an extension of that.

BCR: Through the practice of powwowing, Ada draws on her faith and traditions to heal those around her. Then her personal questioning of faith—typically a very private ordeal—becomes a public one. So both the practice and her inability to practice causes a good deal of consternation in her community. We’re bound to each other, but just how, it seems, remains something we continue to sort out. Did you learn anything or process anything about yourself in community while writing the book?

JM: We’re bound to each other, yet often we can’t live with each other, and yet we must figure out how. Having a sense of self in the larger world—a sense of our insignificance and yet a sense of our purpose—seems essential to living well among others. I think Ada and Will struggle with this—within themselves and their communities.

And I should note that I include in my definition of ”community” the larger natural world…we breathe without trees, yet how often do we include them (and all the other creatures) in our sense of community?

BCR: Too rarely, I’m sure. The natural world comment does require that I mention Cicero. You turn the narration over to a bird, and it’s a risk that pays off. Was there ever a question of allowing the raven voice?

JM: Glad you enjoyed Cicero—and yes, it was a huge risk I really didn’t realize was a part of the novel until a third of the way into drafting. The hardest part of including him was figuring out how to introduce him at the outset, to establish his voice, to warn readers that something odd is coming.

BCR: What else did you struggle with in writing this book?

JM: Time. It took 15 years to write it—and in that time I worked full time and wrote 4 other books—but I knew this story was a part of me, I just had to figure out its genre (it started as nonfiction) and structure.

BCR: You’ve got a long list of acknowledgments at the end of the book, many of which are for readers of the work in progress. When typically do you first bring readers into your process?

JM: My wife is my first reader, and often the hardest. I usually share a first complete draft with her of something that I think I’ve worked on until I can’t work on it anymore. Then I revise some more and start sharing/trading with good friends who also are good readers. That part of the process is invaluable and necessary.

BCR: The novel’s dust jacket is particularly striking. Did you contribute to the design or concept?

JM: Isn’t it terrific!? Did you take the jacket off? The cover itself is even better than the jacket. And I had nothing to do with any of it, other than create Cicero the raven who is ravenous. It’s been fun bragging about that cover like a child who wins a national spelling bee.

BCR: Ah. I actually never took it off, and it was already my favorite book design of the year. Now it’s leagues ahead of all others! (Reader, see the jacket cover image here, but buy the book and enjoy a cool additional design element.) What are you working on now?

JM: Several things—a nonfiction book about a tornado, a collection of essays, another novel based on family stories, and more poems. Poems and essays are like recess from the longer works; I have to have several things going at once. All of it hopefully drawing from and adding to the beauty of this world.

BCR: That’s a lovely thought. Thanks for your time. We’ll see you in April.

Get all the details on the Lex Allen Literary Festival.
Learn more about Jim Minick. ★