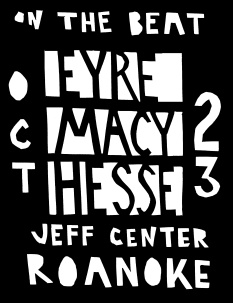 Last night’s sold-out On the Beat panel discussion at Roanoke’s Jefferson Center covered opioid abuse, the effect of economic transitions on rural America, and the role of journalists in telling specific stories that help us make sense of broader issues.

The Virginia Humanities event was sponsored by the Andrew W. Mellon Foundation and the Pulitzer Prizes with Virginia Center for the Book and With Good Reason Radio. The event had support from Radio IQ and BOOK CITY ★ Roanoke and was packaged with this year’s Roanoke Valley Reads, an exploration of understanding, empathy, and effecting change in the world around us.

Journalists get the story so that we get the bigger picture. For instance, Monica Hesse’s book on a rash of fires intentionally set on the Eastern Shore is not just about arson. In researching American Fire: Love, Arson, and Life in a Vanishing Land, the Washington Post columnist found a litany of subjects, among them hope, decline, and erectile dysfunction. However, her foundational subject was the state of increasingly overlooked and under resourced rural places in an increasingly urban society.

Clearly the three featured writers care about their work and their subjects. Hesse temporarily moved to the Eastern Shore’s Accomack County to report on the largest arson case in Virginia’s history and was made an honorary member of the Tasley Volunteer Fire Company. Beth Macy wears a locket reminding her of the loss of Tess Henry, the Roanoke native who’s addiction struggles she followed for the Roanoke Times and this year’s Dopesick. Eric Eyre doggedly pursued the opioid story that brought not only a Pulitzer Prize, but also a small army of corporate attorneys to quiet him. The subsequent legal battle eventually contributed to February’s bankruptcy filing of his employer, West Virginia’s Charleston Gazette-Mail.

“You can’t fake sincerity,” Hesse noted. “You can’t fake curiosity.”  She told the crowd that there are no shortcuts for getting a story. But clearly there are paths into it, and those paths take time. Hesse credited the longer form of the book with giving her the freedom of deeper exploration, comparing her history of arson in American Fire, to Melville’s technical expositions on whaling, whales, and the sea in Moby Dick.

Macy quoted biographer Robert Caro’s philosophy that “time equals truth,” thanking her former editor at the Roanoke Times, Carole Tarrant, for giving her the time to go deep, to get closer to an understanding of the more complex issues.

Yet the Sunday circulation of our regional paper has dropped drastically. There are fewer bureaus to cover rural parts of the region. There are far fewer reporters to dig into the underlying causes of, say, fire. (In addition to Charlie Smith and Tonya Burdick’s 86-fire spree on the Eastern Shore, it was a fire that triggered Macy’s deeper socioeconomic analysis of opioid misuse when researching the stories behind Factory Man. A fire at an abandoned furniture factory resulted from copper theft, the perpetrator stripping wires to get drug money, not just to get high, but to prevent dopesickness.)

NO ENEMY OF THE PEOPLE

The panelists cited the hard work it takes to get a story, and in some cases, they underestimated the risk. The status quo has its entrenched defenders. They come in the form of pharmaceutical executives and powerful politicians. Even local residents can be gatekeepers to critical information, as they very understandably wish to control the narrative of their home, a place worthy of tough defense.  By asking questions, journalists can raise some local concern.

The alarmists though are the powers overtly working to discredit and limit the fourth estate. Eyre noted the political rhetoric against the press and instances of West Virginia journalists being intentionally, publicly discredited by elected officials. And, yes, those officials are following an example set on the national stage.

So a panel comes together. We learn a bit of the behind-the-scenes of reporting. We praise deeper, independent analysis. We better understand the importance of information for our democracy. We buy books, read them together, and discuss them.  Then what?

The answer is a personal one. Action can come in many forms. How we stand up for what we believe in is for each of us to decide.

Caring for each other—caring about the issues affecting our community and neighbors—is the start. Newspapers and books can help us do that. Then, for each of us, acting on our beliefs has to match our individual style, our way of engaging in the world. Or perhaps there’s new way of stepping up that we’re willing and ready to grow into.  And for the benefit of all of us, it just might be time. ★

If you missed the event and are on Facebook, you can watch the discussion here.