Walter’s not there. But his granddaughter is. She’s 26-year old Kayla Burkett, and last May, Kayla opened Walter & Co. Booksellers in downtown Salem.

With a business name like that, the shop sounds established, and the steady stream of customers through the two well-organized rooms of gently used books on a recent, rainy Saturday, makes the fledgling business feel established.

The space at 25 West Main Street is bright, flexible, and active with the frequent scurryings of  Louie, Kayla’s six-month pup. And the staff? Well, it’s her, and the Wytheville native is charming and warm. Her enthusiasm shines through.

It’s clear that her customers both include and become friends. Louie, too, has plenty of fans. One customer chases the puppy between rooms while Kayla fetches a Neil deGrasse Tyson title he came to pick up.

Ms. Burkett has a degree in criminal justice and spent four years as a paralegal. She carries a wide assortment of genres, though she herself primarily reads fiction.  “I get plenty of real life most days,” she says with a smile.

One fiction title she recommends from a nearby shelf is The Great Alone by Kristen Hannah. “I’ve been reading her since I was fifteen” she says. She’s a good writer.”

From across the room a customer agrees.

That’s how it goes in independent bookstores and stores selling used books. A customer says something. Maybe she asks a question. Another customer chimes in. A puppy pads by. A conversation gets started. At Walter & Co. that’s expected. It’s all encouraged.

Stop in to look for something specific or to browse, to trade in some titles (details here) or  to have a friendly conversation. Maybe just swing by to pet a puppy. ★ 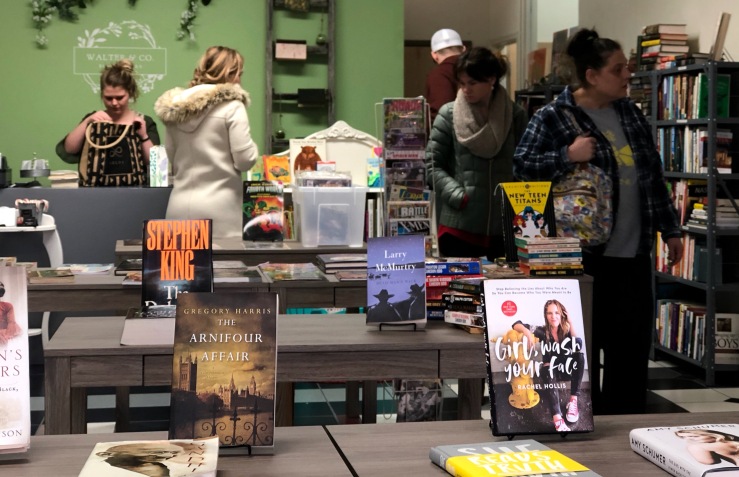