Every summer, friendly seeming faces pop up on the Hollins campus. Some are those of returning students in the Children’s Literature and Children’s Book Illustration Program. (The first program of its kind hosts writers, illustrators, teachers and lovers of children’s literature in a corner of the bucolic campus every summer.) As Tinker Creek tinkles past the well-maintained landscaping, other faces also appear, tucked into bushes, propped at the base of trees. They’re familiar. You knew them as a child. Your own child may even have a close relationship with them. But you have to be quick. They’re only there for six weeks.

They are Hollins Campus Characters, a project of Children’s Literature and Children’s Book Illustration faculty member Ashley Wolff.  Wolff is the author and/or illustrator of more than 60 English language and bilingual titles.  A longtime San Francisco resident, she now lives in her native Vermont, where she writes, illustrates, teaches workshops, and paints murals. 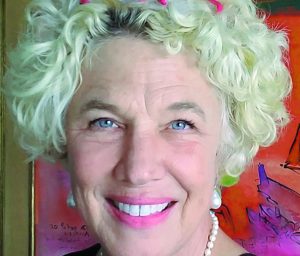 Wolff began teaching at Hollins in 2008, where she saw an opportunity to create an even more immersive learning and creative environment. “My goal,” she writes, “is to make the campus feel more magical and to introduce characters from the long history of children’s illustration to each new class of students.”

The figures are simple and surprising. Mostly characters from classic children’s books, some are from illustrated novels: the familiar head of Pippi Longstocking, a staid-looking Wilbur of Charlotte’s Web. The exceptions are contemporary characters painted in honor of visiting author/illustrators and the Margaret Wise Brown prize-winning books from the last 4 years.

Wolff started putting up the figures five or six years ago and adds five or six to the temporary exhibit each year. “At one point I realized how many famous book characters were male, so I made a special effort to emphasize female characters one summer. Another year I concentrated on characters of color. My choices are pretty subjective: I have to love the book and want to “ghost” the original illustrator’s style as closely as I can manage.”

Writers and artists are always learning, as are teachers. So Wolff had some takeaways from campus this summer. “I taught drawing fundamentals for the first time and had to complete my own brush-up on anatomy and perspective. I am better for that. I articulated some drawing rules I didn’t realize I believed in. I began to understand tattoo culture. I studied the graphic novel form more carefully, and I learned that there is a product called Gorilla Tape that I need for next year, as some of my characters were designed badly in the beginning.”

With summer nearing its end, the characters, with their Gorilla Tape, have returned to their pages, perhaps following the whimsical directional sign in the parking lot. 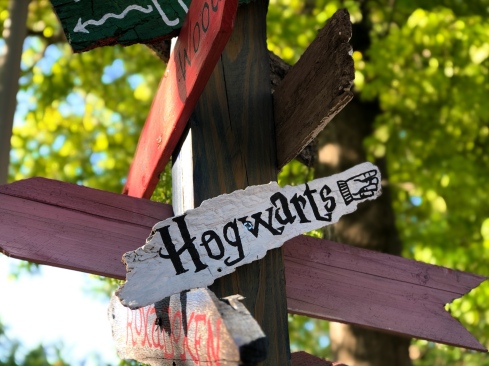 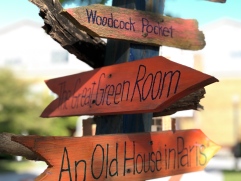 Like I said, you have to be quick! But if you missed seeing them this year, I snapped a few pictures. Next year, get out to a reading by a visiting writer or faculty. Or pay a visit to campus just to see some old friends.