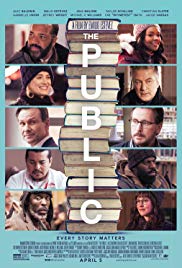 As part of New Connections: Let’s Talk series, Roanoke County Public Library (RCPL) is excited to announce movie screenings with post-viewing panel discussions. The first will be a screening of “The Public” followed by a panel discussion with local experts in homelessness, mental health, libraries, and law enforcement, on Tuesday, October 29 at 6:00pm at the South County Library.

“The Public,” written, directed, and starred in by Emilio Estevez, focuses on a homeless community that refuses to leave the downtown Cincinnati library during a cold snap. After the movie, the panel will discuss the themes raised in the film, and the importance of collaboration between service providers in providing solutions.

Anne Marie Green is a native of Northern Virginia and holds a B.A. from William and Mary, and a J.D. from Catholic University. She served in local government for 34 years before beginning her tenure in July as the President of the Council of Community Services, a non-profit organization that focuses on four issue areas: community engagement, HIV/HCV prevention & care, homelessness solutions, information and referral (2-1- 1).

Jimmy Chapman is Roanoke County’s Assistant Chief of Police, and has served RCPD for 24 years. He is agraduate of FBI National Academy, holds a M.S. in Criminal Justice from Northeastern University, and has worked extensively with mental health providers in the Roanoke Valley.

Lee Clark serves as CEO of the Rescue Mission, leading a talented and passionate team of staff and volunteers to support families struggling with poverty and addiction here, where we live, work and worship.

Shari Henry is Roanoke County’s Director of Library Services. Previously she served in library administration inArlington, as a nonprofit librarian in Hopewell, and as the PR/Programming Manager in Chesterfield County, Virginia. She worked for several years in urban outreach in Huntsville, Alabama, and is a published writer.

Tamara Starnes has been the Chief Clinical Officer at Blue Ridge Behavioral Healthcare in Roanoke since 2015. She has nearly 20 years of behavioral health experience. She is a licensed Professional Counselor in three states, and a Certified Public Manager. Her most extensive areas of knowledge include forensic and crisis work, justice and mental health collaborations, and evidence-based trauma treatment. She received SouthCarolina’s 2011 NAMI Mental Health Professional of the Year award.

Sheila Umberger is the City of Roanoke’s Director of Libraries. She holds a B.A. in History from the University of Kentucky and a M.L.S. from the University of South Carolina. She serves as the lead on the All America City Star City Reads initiative, and is a recipient of the ALA Sullivan Award for her work with children. In 2018, Sheila was named Citizen of the Year, Humanitarian by the NAACP.

The program will take place in the library’s auditorium. Refreshments will be provided. The South County Library is located at 6303 Merriman Road in Roanoke.