Grant Kittrell may not be from here, but we’re claiming him. He came to the area to attend Hollins, and now that he’s graduated, locally employed and locally published, you can find him here and there reading from his first book of prose poems, Let’s Sit Down, Figure this Out (Groundhog Poetry Press, 2017).  Pick up a copy on Saturday at Book No Further. He’ll be there at 2 PM to read and do a book signing with Cathryn Hankla. But first, Kittrell sits down with BOOK CITY ★ Roanoke.

BOOK CITY ★ ROANOKE: Okay, Grant. Here you are. Would you rather answer a half dozen of my questions or subject yourself to an amateur illustration? 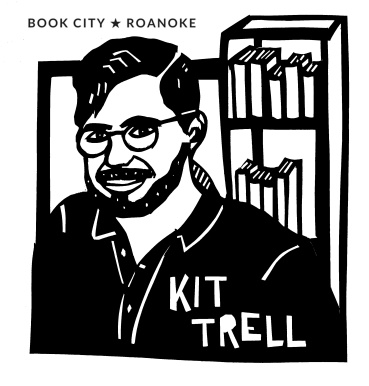 GRANT KITTRELL: Will the amateur illustration cause any physical pain? Sometimes I sense a low pain tolerance, especially in regard to dental visits and spider bite urgent cares. Sometimes I’m convinced I’m something else—a large furry animal, a bear or something, though I’m only 5’8 and a half—I can’t be a bear. No, I’ve seen your illustrations. I offer a mostly human face. But you may need two sheets of paper to fit it in the frame. When I was a toddler, my head accounted for about four-fifths of my body. I’m less dramatic now, but I still feel a little top-heavy sometimes.

BCR: Don’t we all? Fortunately, this is not really a choice. Both will happen in this interview. You will answer questions and get your portrait made. But you must be getting comfortable in this situation, because Let’s Sit Down, Figure this Out is chock full of false choices and imperatives.

GK: That’s okay. I liked your first question so much, I’m going to answer the rest of them without any objection. I love the pressure. I love that kind of imperative because, in many contexts, it can re-center the conversation, bring the absurdity of the question to light, as well as the potential consequences. If I say, “You can either brush your teeth OR feed the cat in the morning,” this automatically imposes a new logic, one that may require another (strange) kind of ethical consideration.

I’ve always kind of gravitated to these kinds of thought experiments, but especially since my first years of college. My second major (besides the especially lucrative English degree) was Philosophy. Thought experiments often work, for better or worse, as a kind of fuel for philosophical discourse. And while, to get more to the book, the book doesn’t always depend on these kinds of imperatives and experiments, I suppose this mindset, at the very least, works as a starting point for many of the poems in the collection. And while thought experiments rarely offer a definitive answer, they can at least, maybe, remind us what we don’t know, what we can’t say for sure, or can offer another wormhole into a conversation, personal or abstract as it may be. I left my philosophy degree confused and out of focus (of course!), but the language and brand of inquiry definitely have found their way into the poems.

The funny (or not so funny) thing is, we’re faced with just as bizarre dichotomies every day—”You can either let anyone own a firearm OR you can let no one own a firearm. It’s your choice.” The thing is, there are a billion possibilities between the two options, but putting them side-by-side, and acknowledging how bizarre the choices are is maybe a good place to start. The “comfortable” place to be is usually at one end of the stick or the other. I usually have to find other ways to be comfortable. Like a hammock or a good bourbon or something.

BCR: Both a hammock and a bourbon can be grounding, and together, doubly so. That bear in “A Proper Speed” never let go of the root.  A narrator pulls the earth by grassy reigns. What else have you found to grab hold of?

GK: What have I found to grab hold of? This one’s tough. The bear seems to have the right idea, holding onto the root. Maybe. I don’t know. Getting back into the woods is a big one. I currently live in the city. There’s a gorgeous park nearby, but it’s hard to be completely alone with myself there (too many “disk golfers”)—so I guess that’s it too: finding time and also having some compassion for myself, in whatever form that takes. And then there’s community, which is the only other thing, and that’s been in constant flux for a while. The thing is, things change so quick. And that’s maybe a fact to hold onto/accept fully in itself. To not hold too hard or lightly to things in the first place, though there are times maybe when we have to hold something with all we got, or not at all–seems contradictory, I know. But maybe that’s what I mean to say. There’s usually a lot of truth to unpack where opposites meet, where things feel contradictory. Because there’s almost always a way for opposites to coexist, for both things to be true, or neither to be true all at once. There’s been a strange comfort in the thought lately, and maybe this just goes back to Whitman’s “Do I contradict myself?/ Very well then I contradict myself,/ (I am large. I contain multitudes.)” Accepting this for myself and in others feels like an okay thing to hold onto, though it’s an easy thing to talk about. 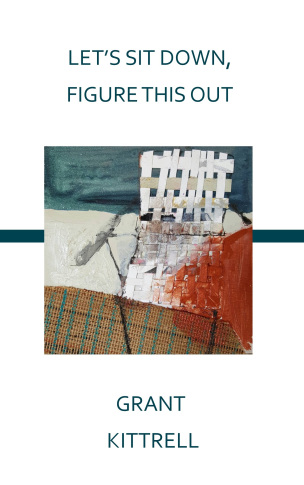 BCR: You do like thinking about these things. Wordplay is another part of this adventure. Familiar phrases are made literal or stood on end. To what or whom do you attribute your pleasure and love of language?

GK: As for wordplay, ah, um, I’m not sure. My first thought is Nana, who appears in the collection a few times. She used to ask us kids things like, say, what does “awesome” mean. And we’d answer and she’d laugh and say, “Is it awesome?” The word deserved more than just a cursory glance, and she seemed to find delight in testing the meanings of things, especially abstract words like, “awesome” or “wonderful.” Is it wonderful? And I guess I’ve found a love for the anecdotal and the fable through Papa. He can be pretty crude, but he pulls stories and rhymes out of the air like that. He’s got a whole set list for farm animals. And then he’s got one he remembers from a bathroom stall when he was a kid that ends on the line, “here lies the remains of a sex machine.” On a very different note: while language can have so much power—while it often is power—it’s also so flimsy and so easily misinterpreted. And because it’s so flimsy, it often means nothing. It means nothing and everything. People say a lot of things. I guess a part of me always wants to investigate this.

BCR: Awesome. You’ve done some readings with other Groundhog Poetry Press poets. What in the audience response to your work has surprised you?

GK: I’ve only just started doing readings for the book over the last couple months and nothing’s been too surprising from the audience so far. No banana peels on my head, if that’s a thing, not yet. I love doing readings. I often feel more comfortable in front of a classroom or audience than I do floating loosely through a crowd of people. For better or worse, I try to bring some level of performance to it. The truth is, I have a pretty short attention span, and I get bored at many poetry readings. It doesn’t necessarily have to do with the poet’s reading of the work, or the work itself–but hell, it’s probably some combination of the two. I’ve had a few folks mention they love hearing my work read out loud, which I’m generally happy to hear, but sometimes it makes me then worry that something might be lost on the page. I don’t know. In any case, I love meeting new people at these things, and I’m looking forward to the next one.

BCR: There are a lot of critters in this collection—a lion, swordfish, squirrels, a bear, chickens, and goats. But there are no groundhogs. Did your publisher at any point pressure you to include one? 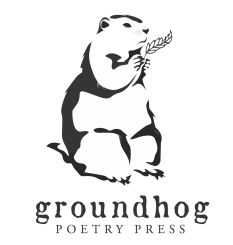 GK: As for critters—hah, no the publisher never pressed me to include a groundhog, though at one point my friend (and fellow Groundhog), Cathryn Hankla, said jokingly (I think) that I I should change all my squirrels to groundhogs. Gophers do make an appearance, though there is a substantial difference between a gopher and a groundhog–gophers are part of the Geomyidae family, and groundhogs are marmots, part of the family Sciuridae, which also contains other critters like squirrels and chipmunks. I love these little critters, partly because they’re so prolific and so…so inconclusive? I also grew up with a lot critters around—squirrels, raccoons, chickens. We buried our chickens alive in the sandbox with just their necks sticking out. No harm done? Baby coons are real cute. And then squirrels were/are everywhere. Everywhere.

BCR: And guns. There are also a lot of guns here. Knives, too. But more guns than knives. Where are you aiming your sights next?

GK: I didn’t realize there was so much violence! Who did it?? The thing about aiming is that sometimes it’s real hard to be aiming at many things at once—the second poem in the collection has something vaguely to do with this. Maybe not. Anyway, from here, among other things, I’ve have two main projects: I’m working on another collection of poems, one that deals more directly, more literally, with home, with roots, with place, with displacement. I’m also working with a visual artist from Staunton, VA on a picture book. This project’s been slow coming lately, but I’m so eager to jump back in once I can get my feet set again. There will be a cloud! Also, I generally keep too many other projects on my desk at once, and they often distract from each other. Sometimes I drop it all and, in every sense of the phrase, I take a hike.

BCR: Thanks, Grant. We’ll watch for the next projects, and until then, we’ll look for you on the trails.

Grant Kittrell has served as an editor for The Hollins Critic and is now the Poetry Editor at Flock Literary Journal. His work has appeared or is forthcoming in The Common, The Carolina Quarterly, The Normal School, and Barely South Review. Join Grant Kittrell with fellow Groundhog Poetry Press author Cathryn Hankla (Great Bear) on December 2 at  2 PM at Book No Further for a reading and book signing. ★