In honor of Pride month, Dr. Gregory Rosenthal offers a list of five books for better understanding LGBTQ+ experiences. Most are available for reading at the Roanoke LGBT Memorial Library, located inside the Roanoke Diversity Center. 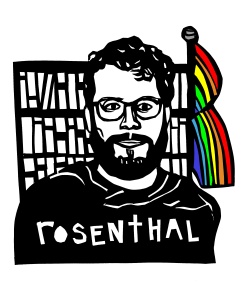 First, a little background: Dr. Rosenthal, an assistant professor of public history at Roanoke College, co-founded the Southwest Virginia LGBTQ+ History Project, a community-based queer public history initiative. The effort has resulted in the LGBTQ History Collection at the Virginia Room of the Roanoke Public Library, as well as a digital archive. Students and community members have recorded oral histories with LGBTQ+ elders. And the group offers monthly walking tours of Downtown Roanoke and Old Southwest, Roanoke’s historic gayborbood.
And it doesn’t have to be a special month to better understand our neighbors and the community. Take a tour, visit the Roanoke Diversity Center, or read a book any time of year. Here’s what Gregory recommends as a starter list.

This is the classic text—some consider it the “bible”—of American gay history. Katz looked far and wide for any written evidence he could find of homosexual behaviors across the country from the beginning of European settlement through the 1970s, and he compiled it into this sprawling anthology.

Gay men have always received more attention in the public eye than lesbians. But lesbian “herstorians” were  hard at work in the 1970s and 1980s compiling evidence of their own history. Faderman’s book is one of the earliest to document lesbian herstory. Those interested should also check out the Lesbian Herstory Archives in Brooklyn, New York, founded in 1974, and the largest collection of lesbian historical materials in the world.

While the Roanoke LGBT Memorial Library does not have a  strong collection on transgender history, Feinberg’s novel is considered one of the classics in early transgender storytelling. Feinberg later went on to publish Transgender Warriors (1997), which provides more history. Interested readers should also check out Susan Stryker’s second edition of Transgender History (2017), which takes trans history right up to the present day.

For those seeking more local or regional history, James Sears’ collection of books about the LGBTQ South is a great place to start. This one details the stories of gay men and women in the South in the 1950s and 1960s (before the modern gay rights movement began). He’s also got a follow-up book about the 1970s called Rebels, Rubyfruit, and Rhinestones: Queering Space in the Stonewall South (2001).

Finally, this one is not in the Roanoke LGBT Memorial Library collection, but it is a must for those wanting to understand the African American LGBTQ experience. Johnson conducted interviews with over sixty Black men—as well as some Black trans women—and tells their stories in this important book about the queer Black experience.