Robert Anthony Siegel effectively recounts the close distance at which we live our lives in his memoir Criminals: My Family’s Life on Both Sides of the Law (Counterpoint, 2018). With episodes spanning from youth to recent adulthood, the family dynamics captured may seem extreme on the surface, but they also portray the type of awakenings we each experience. Even parents aren’t what they appear.

Siegel’s outsized father spent years overeating and managing depression. He served a sentence for activities he engaged in while he was legal counsel for members of the Hells Angels in the late Sixties and early Seventies. Meanwhile Siegel’s mother instilled in the family a taste for culture and a sense of exceptionalism. Deception is at the heart of maintaining outward appearances. How would it not creep into the heart of the close-knit and loving family? It sounds discordant, but it was simply the life around him.

Robert Anthony Siegel and his wife, Karen E. Bender, teach creative writing at Hollins University. Both have recent books, and each will read at Hollins on Thursday evening. On the occasion, we checked in with Mr. Siegel. 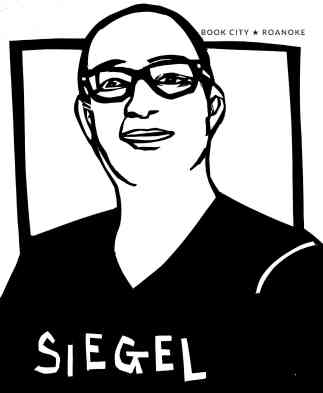 BOOK CITY ★ Roanoke: Subtitles are very popular in nonfiction.  You settled on the title Criminals: My Family’s Life on Both Sides of the Law. What other subtitles were on the shortlist?

Robert Anthony Siegel: A subtitle has to give the reader some sense of what the book is about without being too horribly reductive. I tried and tried, but sometimes it felt like I was attempting to boil my life down to a haiku. For that reason, I can’t remember the rejects—I was at the outer limits of my linguistic territory and they were mostly pretty terrible.

BCR: That makes me want to start subtitling things, like meetings in my calendar, or maybe I’ll write my life-ku. I’m sure I can come up with a really bad one. In the memoir, you look back with an adult’s wisdom and frankness about qualities of your younger self.  Yet you also write about the difficulty of reading your letters home from Japan when in college. What tips do you give your students writing memoir on accessing difficult times and getting them onto paper?

RAS: Oh, it’s enormously hard diving back into the past. I think the first and most important step is just to acknowledge that difficulty, and then to approach the task with compassion—for yourself and for everyone else, too. Remember that anger is often the least interesting response to events, that small moments are usually more revealing than big ones, that we only know the world through our senses, and that beauty is a redemptive force. Write in scene, avoid summary if you can, and trust in the power of imagery. If the story is sad, write it as comedy, as that will make it feel even sadder for the reader while giving you some breathing room.

BCR: That’s a heck of a lot of good advice packed into one paragraph. I’ve read entire books on writing with less content. People should really read this blog. And they should read Criminals. The memoir is largely, though not strictly, chronological, alternating between longer essays that stand well alone and shorter vignettes. How do you describe the structure? What’s at work here?

RAS: I was borrowing a structure I’ve loved in other books, such as Stuart Dybek’s Coast of Chicago and Jayne Ann Philips’ Black Tickets—though both of those are story collections, rather than memoir. The vignettes emphasize image and theme and the more intuitive or associative ways of making connections between the longer pieces. To me, this feels true to the way memory really works.

BCR:  It does come across as very natural.  There’s striking imagery and some lovely language, but the book doesn’t nudge you to tell you it’s a literary work. In fact, at points it feels conversational. Someone’s telling a story here. Was that the tone of this from the start, or did it evolve?

RAS: Well, I’m against pretention and gratuitous difficulty, in favor of concision, simplicity, intimacy. It seems to me that literature should feel like a conversation—open and vulnerable.

BCR: The Eileen Myles poem “Milk” serves as an epigraph. How did you choose it?

Oh, it was a perfect fit. That line about the people in New York, like a chain gang, connected in their knowing and their saving of each other—that’s my book in miniature. I used to recite it to myself while writing as a way to remember: the desire to be known, the yearning to be saved, the feeling that your mutual aid society was something of a criminal enterprise. If you haven’t heard it, here’s an interesting reading of the poem online at the New York Times’ T Magazine.

BCR: Thanks for that link. Hearing authors read and discuss their work can put it in an entirely new light. Thanks for talking with me here and enriching the reading experience.

Hear Robert Anthony Siegel read from Criminals on Thursday evening, November 8, in the Hollins Room of the Wyndham Robertson Library on the Hollins University campus. The reading also features Karen E. Bender, the other half of this husband-and-wife literary team. The following day (Nov. 9 at 11), the pair will hold a craft Q & A in the library. Stop by and be part of the conversation.